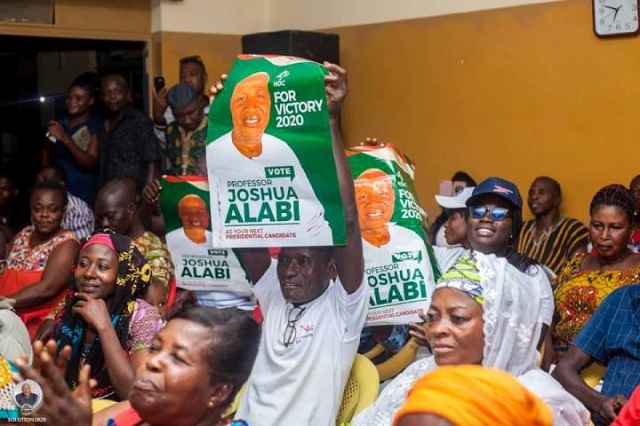 One of the key contenders in the ongoing National Democratic Congress (NDC) presidential primary, Professor Joshua Alabi, is likely to be denied the opportunity to cast his vote in the nationwide polls to elect a flagbearer for the party.

The name of Prof. Alabi is missing from the official register at the St Michael polling station at Nungua in Accra where he has been voting in all elections.

The Electoral Commission representative supervising the election at the polling station is said to be unyielding to the pleas by the party’s chairman and director of elections at the Krowor constituency to allow Prof Alabi to cast his vote.

Prof. Alabi said the incident is a manifestation of what some of the aspirants in the primary have been complaining about in the last few months which according to him, the party has failed to address.

In his view, someone of his stature has suffered this fate, then a lot more ordinary members of the party could be denied their vote under similar circumstances.

“If Prof Joshua Alabi who happened to be a member of parliament for krowor constituency who has been voting all his lifetime here cannot find his name in his constituency, then you can imagine what will happen to other people who are supposed to be voting,” he noted.

Asked by our correspondent whether he suspects sabotage, he said: “I don’t know who did this but this shouldn’t have been a mistake at all,”.

He said he would continue to wait to see if he will eventually be allowed to vote in the primary, saying “for me, I’m waiting to see how they resolve the issue”.

He recalled how Adu Asare who was vying deputy general secretary of the NDC had his name changed on the ballot paper.

“The last election at the trade fair site, somebody campaigned around the whole country and he went and his name was changed. As we sit today, they gave us raw data which is not correct, we spoke about it and their mad dogs started barking at us” he stated.

Prof Alabi alleged there were “serious lapses” within the party, claiming it contributed to the party’s defeat in the 2016 general elections.

According to him, some NDC members were denied their votes in the 2016 parliamentary primary because their names were missing from the voters’ register used, a situation he said caused the affected persons to campaign and vote against the NDC in the general elections.