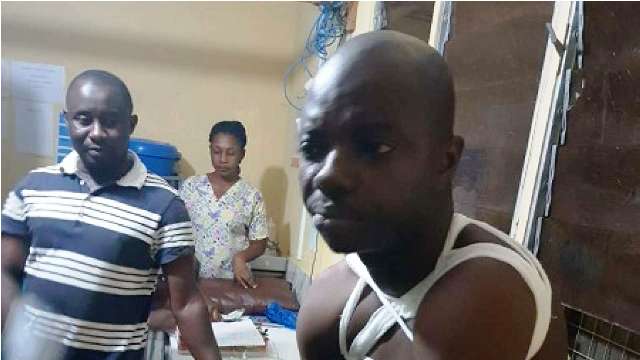 An executive member of the New Patriotic Party (NPP), Kwame Baffoe known widely as Abronye DC has been accused of stealing and selling lands to multiple buyers in Wenchi in the Bono Region.

In a press conference held live on Facebook and monitored by fnn24.com, the Bono Regional Youth Organizer of the NDC, Efo Warlanyo Tsekpo damaged the integrity of the NPP communicator.

According to him, Abronye DC is a common criminal who was beaten because he sold lands that did not belong to him to multiples of people.

“..this is a criminal that was beaten for stealing land we all know very well that he was beaten and sent to Sunyani Regional hospital, a hospital built by John Dramani Mahama. And the reason for his beating was he sold lands that did not belong to him to multiples of people.”

Efo Warlanyo Tsekpo again claimed that this same Abronye DC has defrauded a fetish priest everyone is afraid of in Wenchi.

“Abronye in the Bono Region is known by all of us to be a criminal even the courts in Sunyani can testify criminal records that have been packed from the lower courts to the lower courts. We are not fabricating stories about Abronye’s criminality. Abronye even went ahead to defraud a fetish priest everyone is afraid of in Wenchi”

Watch the full press conference below;

Stephen Atubiga Breaks Away From NDC; Announces His Own Political Party