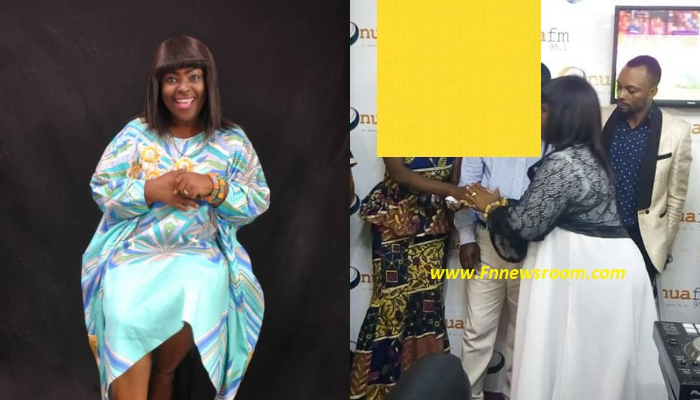 Owurayere Nanapanin Arhin whose heart is filled with compassion for humans has donated an undisclosed amount of money to the couple and a woman who intended committing suicide.

In an interview with Fnnewsroom.com, the kind-hearted explained how she used her popular radio program “Obaasima” on an Accra-based Onua 95.1 FM to save and transform lives.

According to her, a married man who had listened to her radio program walked straight into her office one day and told her that he wants to take his life because of the unbearable financial crisis he is going through.

He narrated that, he has been married for 19-20 years with three children and lost all his savings to unknown attackers who took everything from him on his way from the bank one day.

He bemoaned that since that day he has been rendered ‘helpless’ and ‘hopeless’ and the option left for him was to end his end.

However, kind-hearted Owurayere Arhin after listening to the man, made arrangements to bring him and his wife on her radio program to interview them.

The wife who also confirmed everything her husband told Owurayere Arhin earlier live on the radio had planned on ending her life without informing her husband.

This means that both the man and the woman had planned to commit suicide without telling each other. What a world!!!

Owurareye Arhin presented an undisclosed an amount of money raised from the contributions from her counsellors, friends, listeners of “Obaasima” and herself to the couple so they start a business.

This kind gesture had saved the couple from ending their lives.

The self-acclaimed ambassador for Post Marital Counselling also advises that couples should seek counselling after marrying because it will help shape their marriages and since marital challenges are real after marriage.

Lady Evangelist Owurayere Nanapanin Kyeiwaa Arhin has also encouraged Ghanaians to listen to her “Obaasima” program on Onua 95.1 FM this and every Saturday @6:30-8:30 am to transform their relationship and marriage.

See exclusive photos from the donation, however, we had to cover the faces of the couple for security reasons.