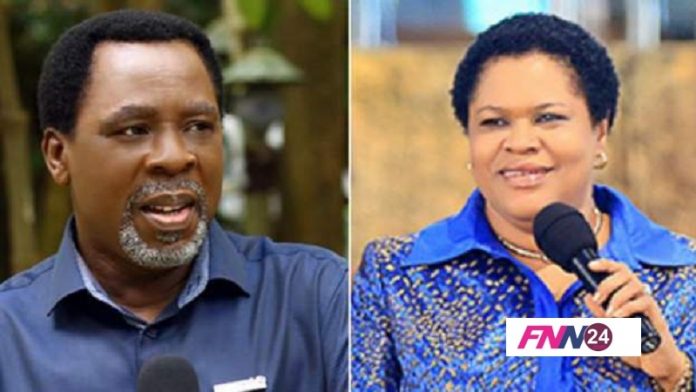 The TB Joshua church in Nigeria has announced a new era in its leadership as the late preacher’s widow takes over the Synagogue Church of All Nations.

Evelyn Joshua said her late husband will remain as the general overseer and founder of the church. She has asked for prayers as she begins her new role. Mrs. Joshua said in-person worship would resume “as God leads”.

Mr Joshua died in June and the church has never announced who would take charge. The influential preacher was buried inside his synagogue in Lagos after a week of mourning.

T. B. Joshua wrote that in a heavenly vision he received ‘divine anointing’ and a covenant from God to start his ministry in 1987.

The church started with a handful of members but has since become one of Nigeria’s most influential churches, attracting over 50,000 people to its weekly Sunday services at the headquarters in Ikotun-Egbe, Lagos. Joshua, the church’s founder and senior pastor, died following services on June 5, 2021.

SCOAN is especially known for the huge number of foreign pilgrims it attracts with The Guardian reporting the church receives more weekly attendees than the combined number of visitors to Buckingham Palace and the Tower of London. This Day newspapers reported that “about two million local and inbound tourists” visit SCOAN annually.

It has been described as “Nigeria’s biggest tourist attraction” and “the most visited destination by religious tourists in West Africa”. Figures released by the Nigerian Immigration Service indicated that six out of every ten foreign travellers coming into Nigeria are bound for SCOAN.

We Waste Lot Of Fuel Because Of Heavy Traffic – Otumfuo Complains